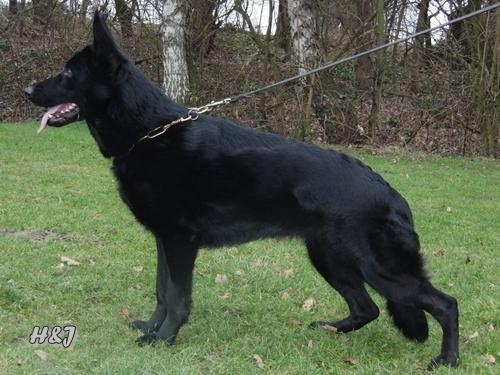 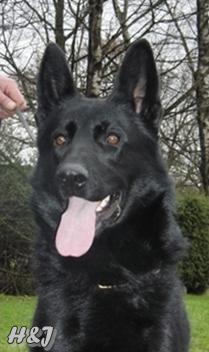 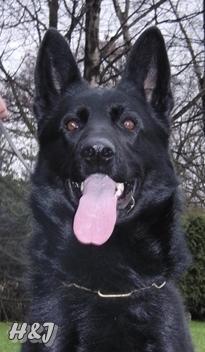 Above: VERA, at age 2 and a half, in Germany

V Vera von der Bergschlucht, SchH3 (x10), Kkl 1, ZW 72, HD-ED normal is one of our most favorite females.  An absolutely gorgeous and huge female, and a daughter of V Bomber vom Wolfsheim, Vera is an explosive and powerful female.  We are still surprised that we were able to secure her.  She is an extremely balanced, intense, strong and level headed female, unusual in that she does not lose her composure when placed in a stressful situation or in a scenario she does not like.  She is the absolute perfect combination that we would want to impart in all our offspring from our kennel.  At the age of 3 and a half years, Vera had already competed in SchH 3 multiple times and has achieved the coveted title no less than 10 times so far.

Originally, we were trying to purchase a son sired by Nolan and Vera that was bred on Aug 11, 2011 named Xento von der Bergschlucht.  Being that he was a son of V Nolan vom alten Wingertshaus and that Nolan is a Paska son, we wanted to get Xento for our future breeding program.  We started with offering 6,000 Euros ($8,400.00) for this young, untitled, unproven dog who was 17 months old at the time.  However, the owners who owned Xento (and Vera) did not want to sell him.  We upped our offer to 8,000 Euros ($11,200.00).  We were notified that they already had a standing offer from Japan for Xento for 15,000 Euros ($21,000.00)…for an untitled, unproven, young dog!  That was too much for us.  However, it shows what he was valued at and what the owners who are training him currently felt he was worth at the time.  Feel free to click on his link above.  At 17 months, Xento was already 65 cm and weighed 41 kg.

Fortunately for us, they did accept the offer we made for Xento’s mother, Vera.  Fast forward another few weeks, and we were able to finally secure the purchase of Xento’s father, V Nolan vom alten Wingertshaus.  We have been trying to purchase Nolan for our breeding program for over a year.  And fortunately for us, our persistence finally paid off.  Nolan arrives at our kennel on March 13, 2013.  Any puppies with Nolan and Vera will be priced higher than our regular litters.  Please note that there is no black male working dog in the USA that is more accomplished than Nolan, having won 16 First place competitions in SHOW in the working class as well as competing at the German National Championships (Bundessieger) from the age of 3 onwards (from 2009 to 2012).  Combined with an amazing, one in a 10,000 females like Vera, the offspring are already valued by at least 2 other countries (Germany and Japan) well over $20,000 even before getting titles.

Below:  Vera at age 4, at home at Kennel von Wiese, after taking a swim in the lake